What a week of sport we have had at Cogenhoe Primary School! Following on from the New Age Kurling finals on Tuesday, we had a team of athletes compete at the county Boccia finals on Wednesday. After the event went into a play-off end (extra-time as we had drawn the match), Hannah Bennett landed a wonderful shot next to the jack which meant we were county champions.

In the build up to the final, the team had only lost one match and knocked out the reigning champions in the semi-final. The final was a tense 2-2 draw and needed and play-off to separate the teams but our champions came out on top and brought home the silverware.

Huge congratulations to Joshua Kings, Hannah Bennett and Colin Samson. Well done all. A special credit Sam Lickerish for his role as a young leader at the event. 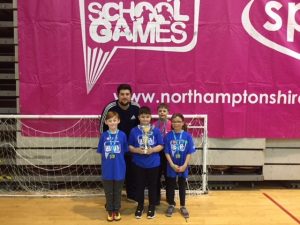